Within the offline sales model the participating companies agreed to allow sales based on the provided fare data. The receiving company is responsible to apply the rules defined within the fare data. In case the implementation does not cover some features it is not allowed to sell fares that use these features.

A data delivery might specify a minimal version number of the schema that needs to be supported to use the data.

The data delivery will contain the version number of the used json schema and the version number which is required to process the data. Also, a change in a minor version might restrict the usage of older version in case a carrier used a new optional feature which is mandatory to his fares.

Automated asynchronous bulk data transfer is an option implemented by queues. The queues must implement the AMQP 1.0 specification.

On bilateral agreement other queue technologies might be used between two systems.

Queue authentication and encryption must use TLS version 1.2.

The fare structure delivery is the bulk data object collecting the fare data fareStructure of a delivery and the delivery meta data delivery.

Definition of a single fare

The single fare represents the smallest unit to be integrated in an offer. Within the offline data the fare collects the references to the constraints that need to be applied and the price.

Some constraints are bundled within the fare constraint bundle to avoid repeating the same data too many times: 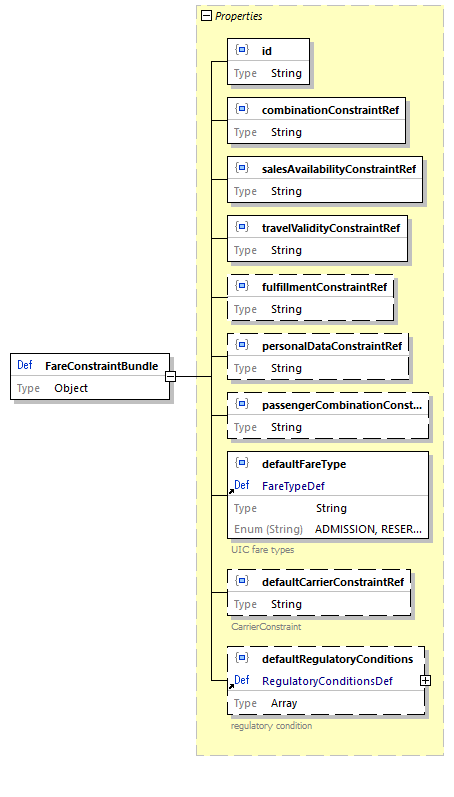 A data structure to define a calendar e.g. used in sales availability. 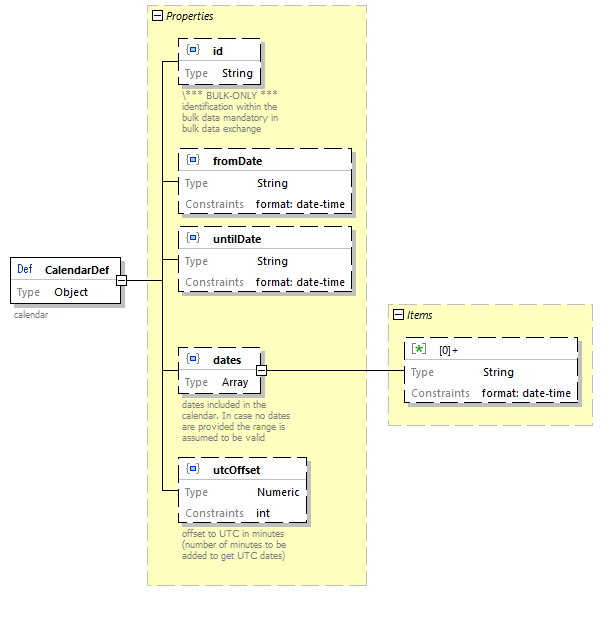 All texts provided wit the data use the text data structure providing short and long texts and translations in different languages. To support legacy implementations and the conversation to the 108.1 specification additional texts without special characters can be defined. 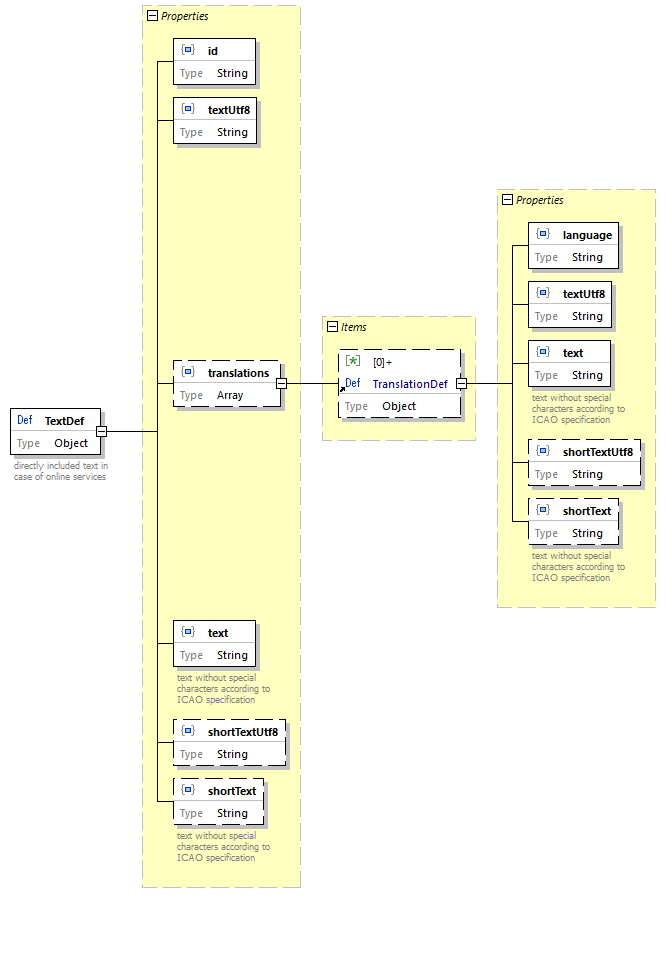 Station names have been included within the data exchange to support names including special characters and names of different length. If in the future the station data exchange of MERITS is capable of providing these names they can be removed here. The station codes used must be codes as defined in MERITS / TAP-TSI.

Station names provides multi language names in short and long form as currently no other data source can provide these names. Short names are used within the route descriptions whereas the long for is used for entry and exit stations.

A legacy border point code can be provided during the migration to the OSDM data model. 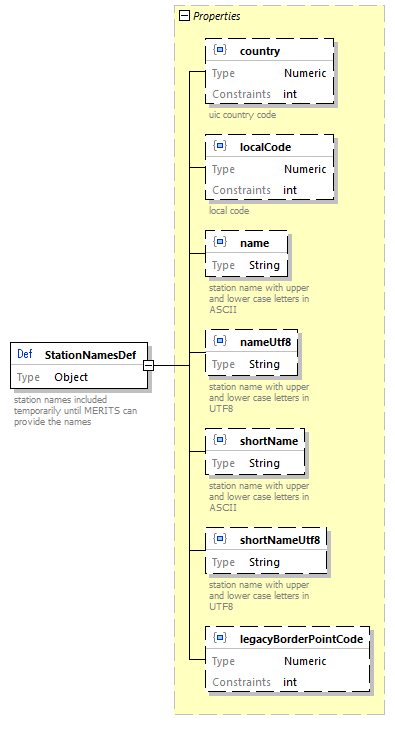 Tis covers the definition of reduction cards used in the fares. The name and some basic information of the cards can be defined. The reduction itself (percentage) is not included as the fare price already provides the reduced price. Some provider specific cards are accepted by other carriers as a generic card. This can be expressed via the included cards feature. E.g. MyCard could be accepted as RailPlus card by others, so MyCard includes RailPlus. 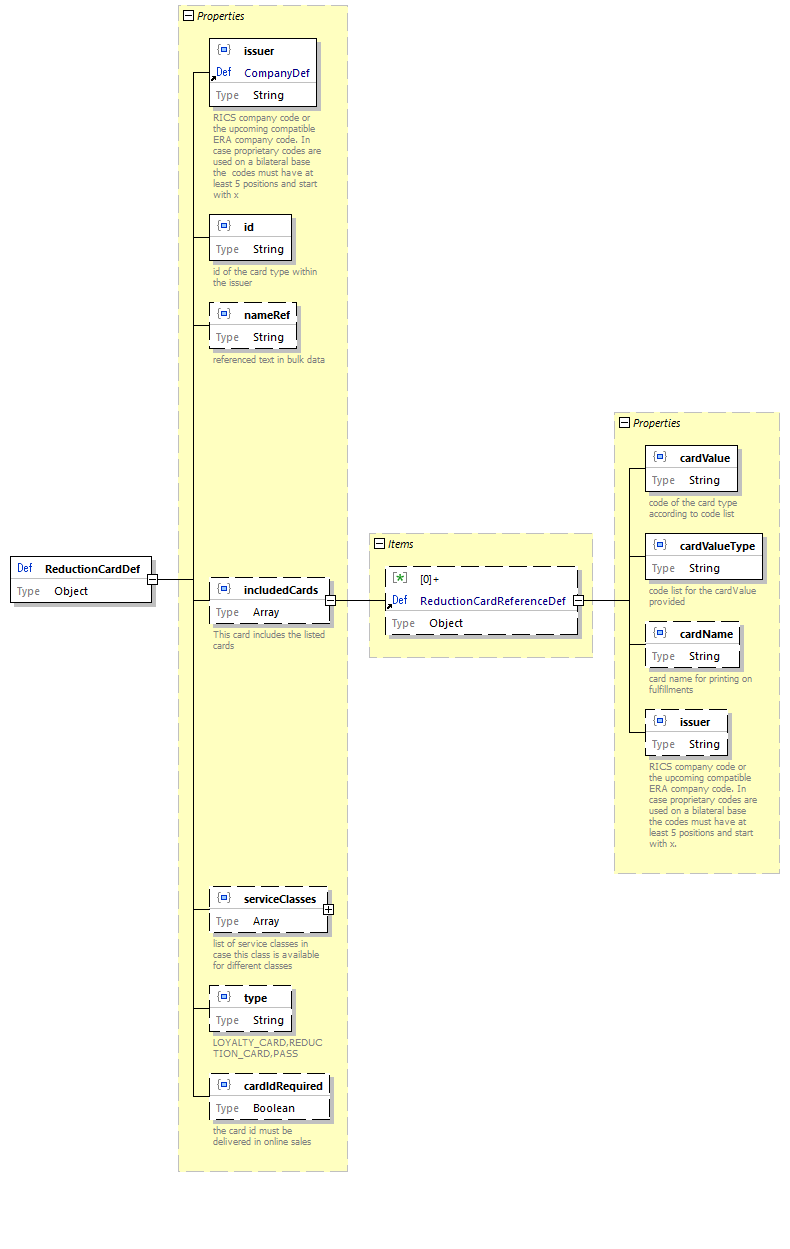 Fare reference station set defines a set of stations that can be used in a route. All station(s) of the set can be used by the passenger. 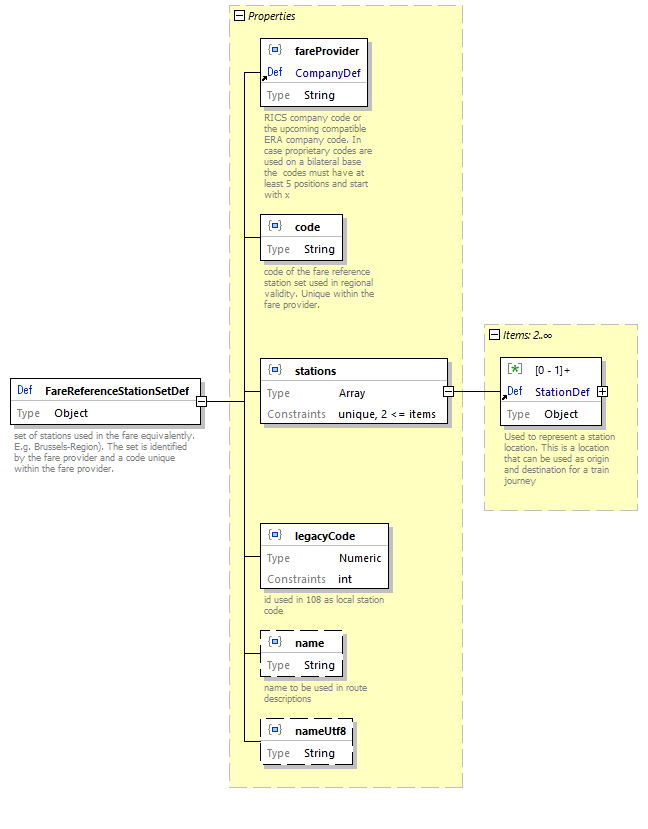 The price of a fare of the refund fee on an after-sale. VAT details can be provided for the price. The default currency is EUR, but other currencies might be used based on bilateral agreements. 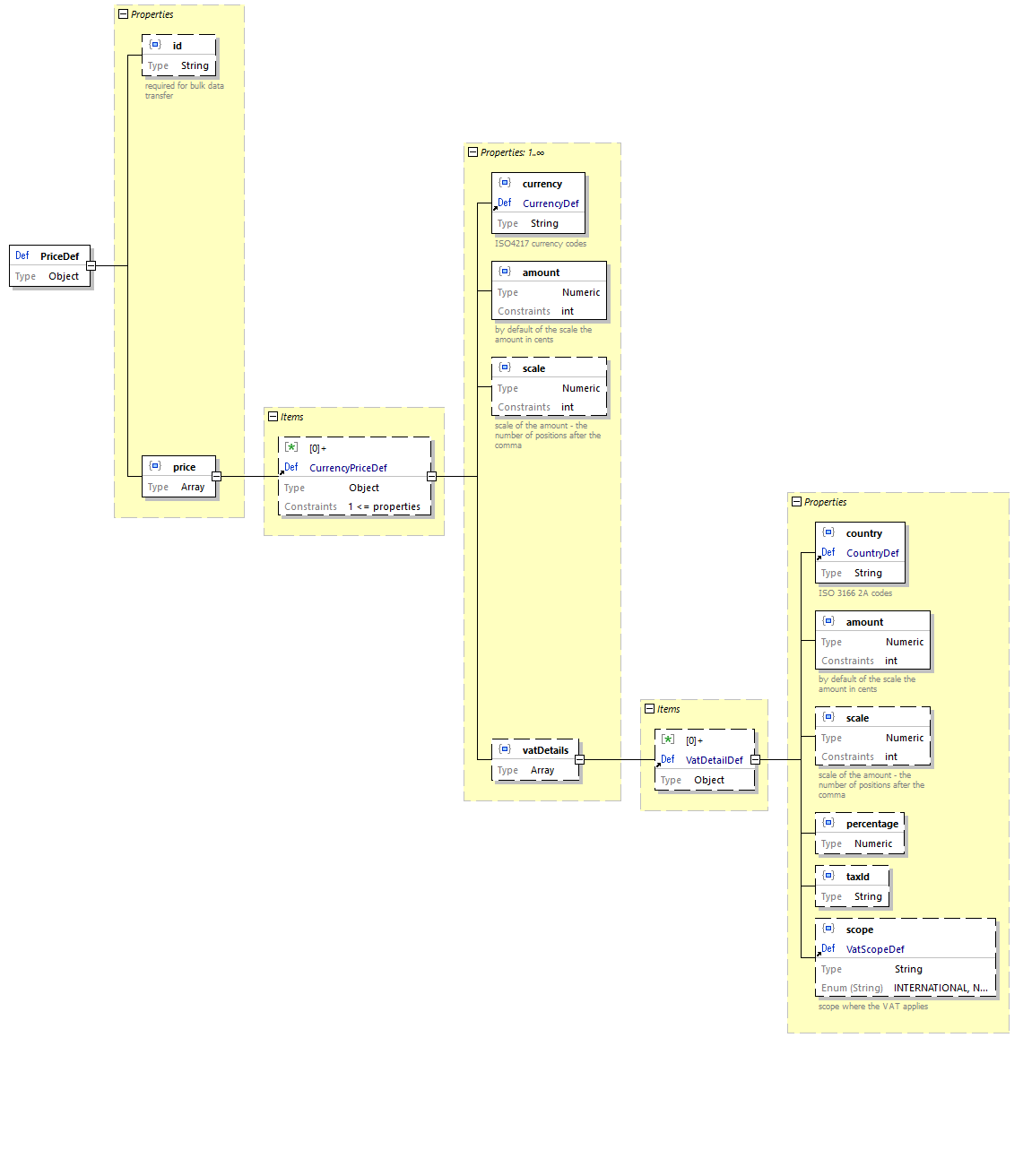 Definitions of a Different Fare Constraints 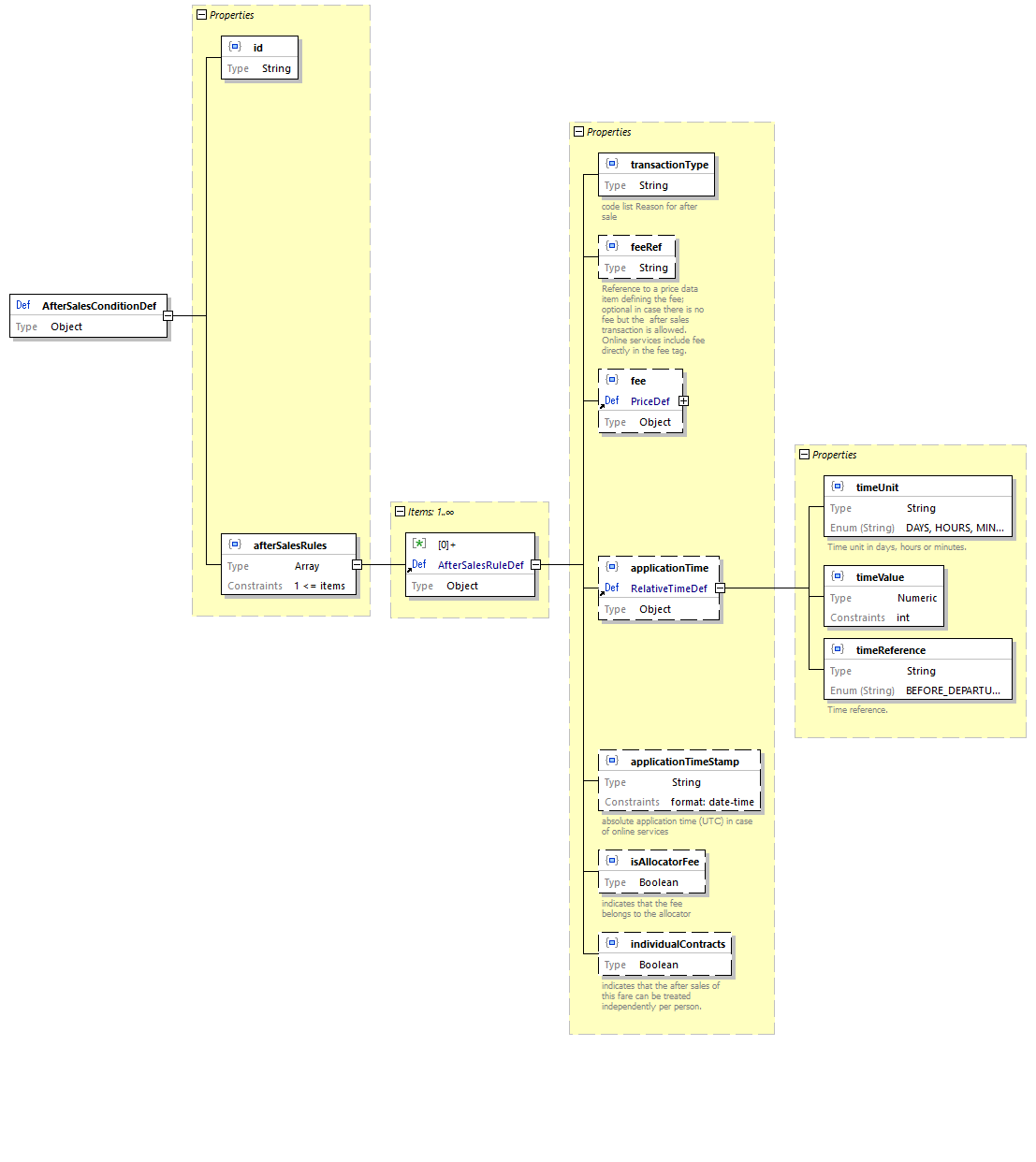 The carrier constraint can be referenced by a fare via the id.

Carrier constraint limits an open fare - not linked to a train - to some carriers. The carriers can be specified either as exclusion list or alternatively as inclusion list.

Carriers are specified by their company code (RICS code). 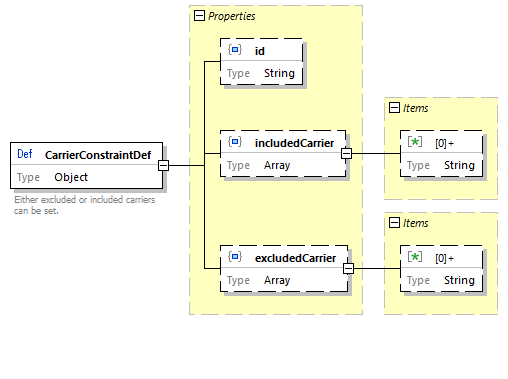 Constraints ruling the possible combinations with other fares of other providers. 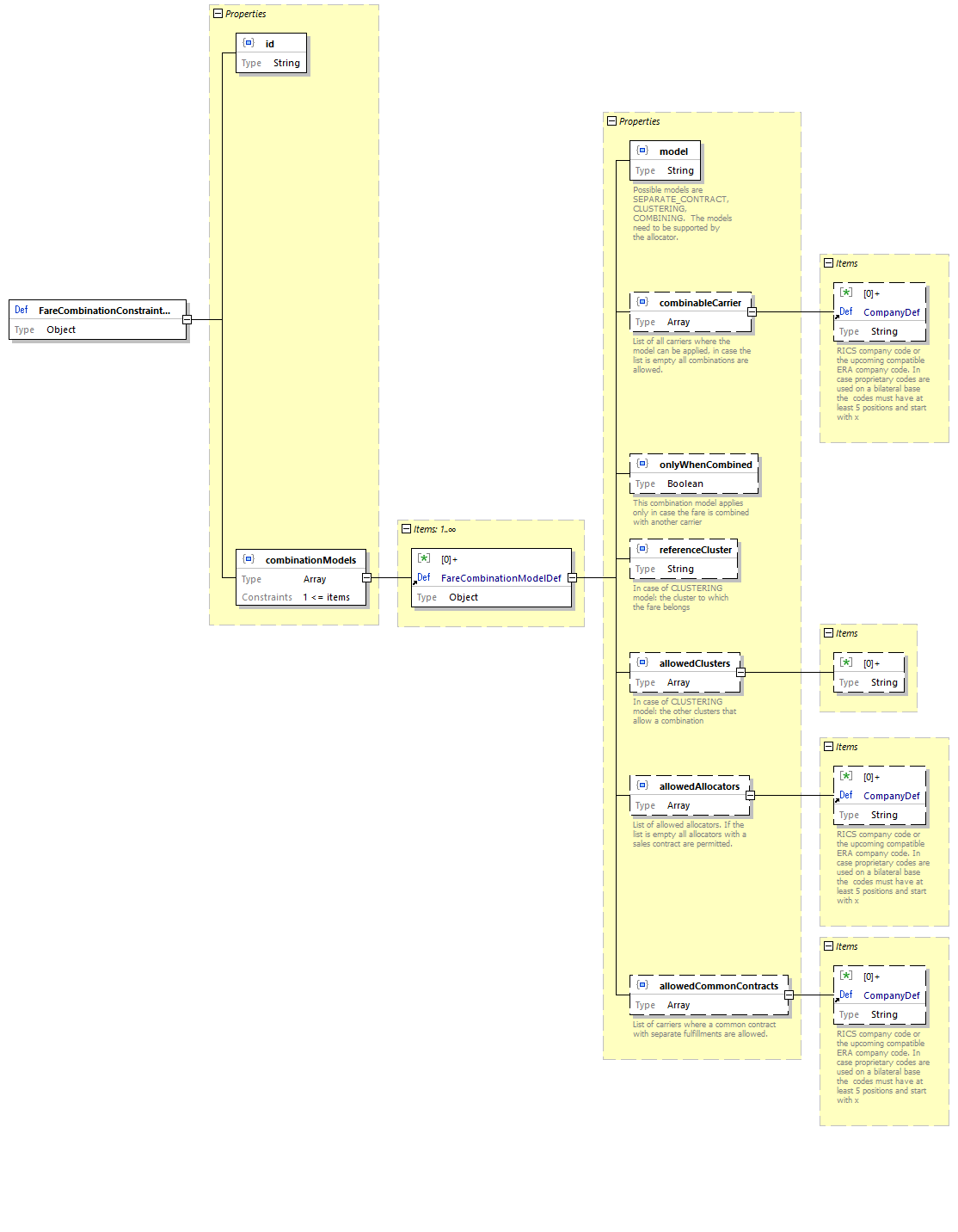 Constraints ruling the possible combinations of passengers for combination on a ticket. 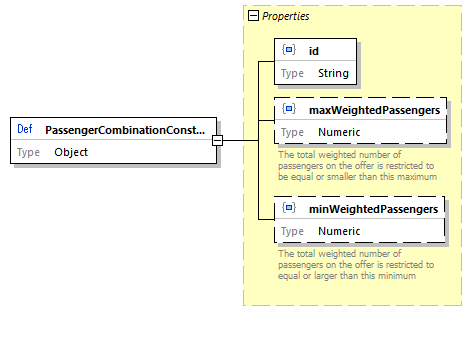 Definition of the personal data required e.g. in a bar code of via online ticket control. 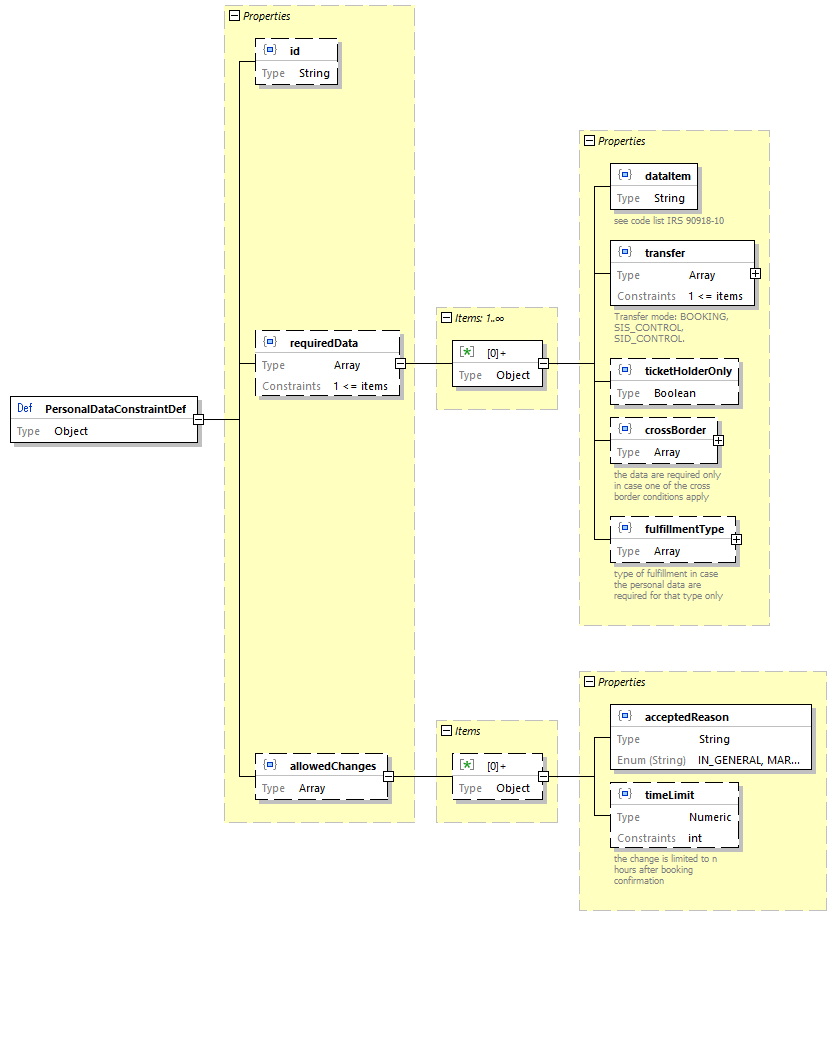 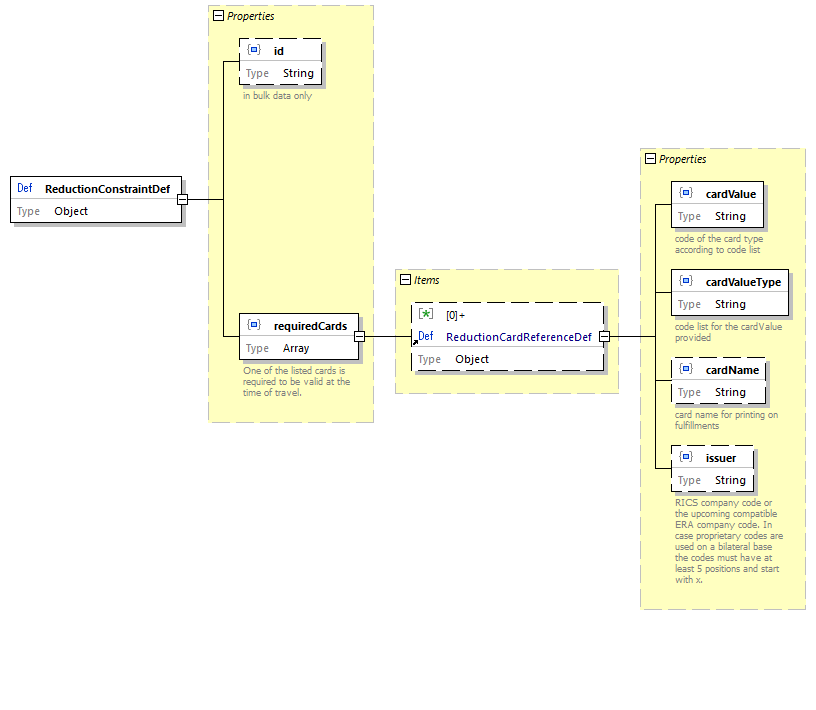 The regional constraint defines the options to combine the fare at the start and end point via connection points. 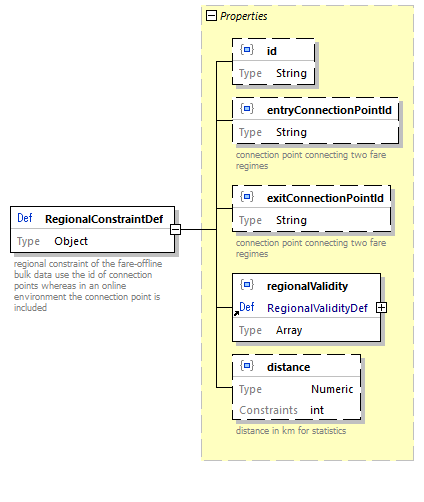 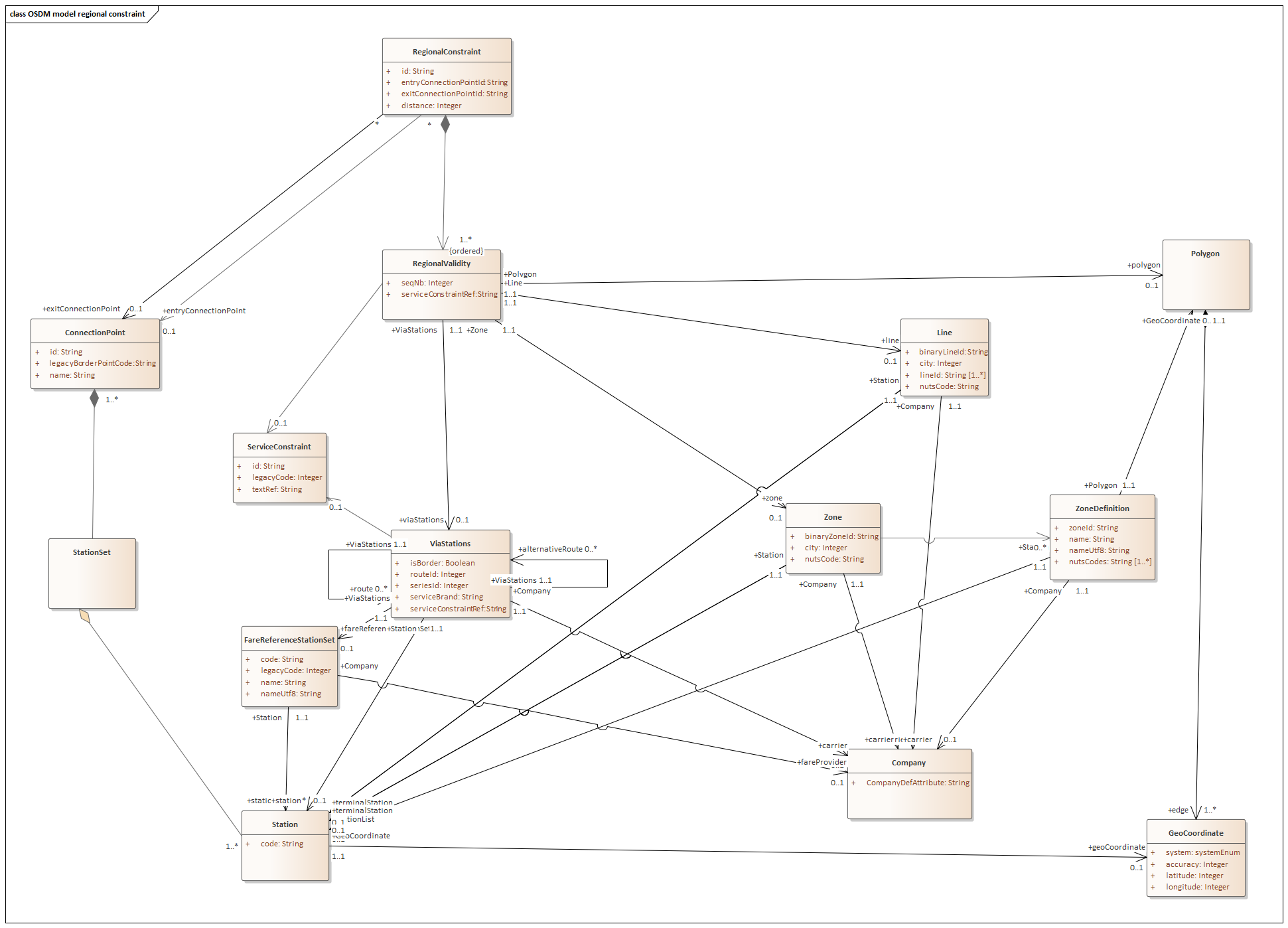 The regional validity defines the geographical validity of the fare. It is defined as an ordered list along the route. Options to define a part of the route include Zones (regional areas), Lines, route descriptions (viaStations) that can define sequences of stations, alternative routes and fare reference sets. Areas can also be defined by geo-coordinates. 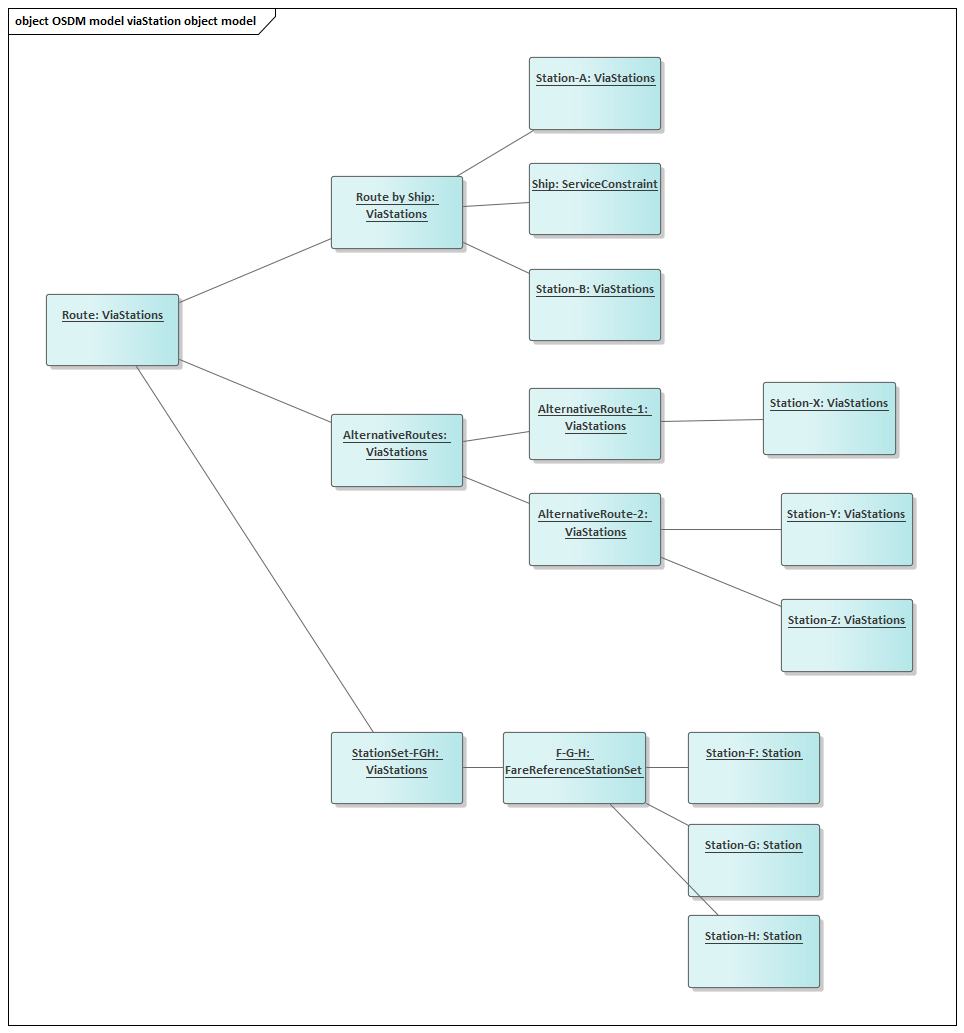 Sales availability defines the constraints on the time when a sale of a fare can start or end. The sales availability is used in the offline data exchange only. A constraint is provides as a list of salesRestrictions that have to be applied.

Sales restrictions can define a start and end of the sale relative to the date of sale or the date of travel.

A reference to a calendar can be provided to indicate all sales dates. 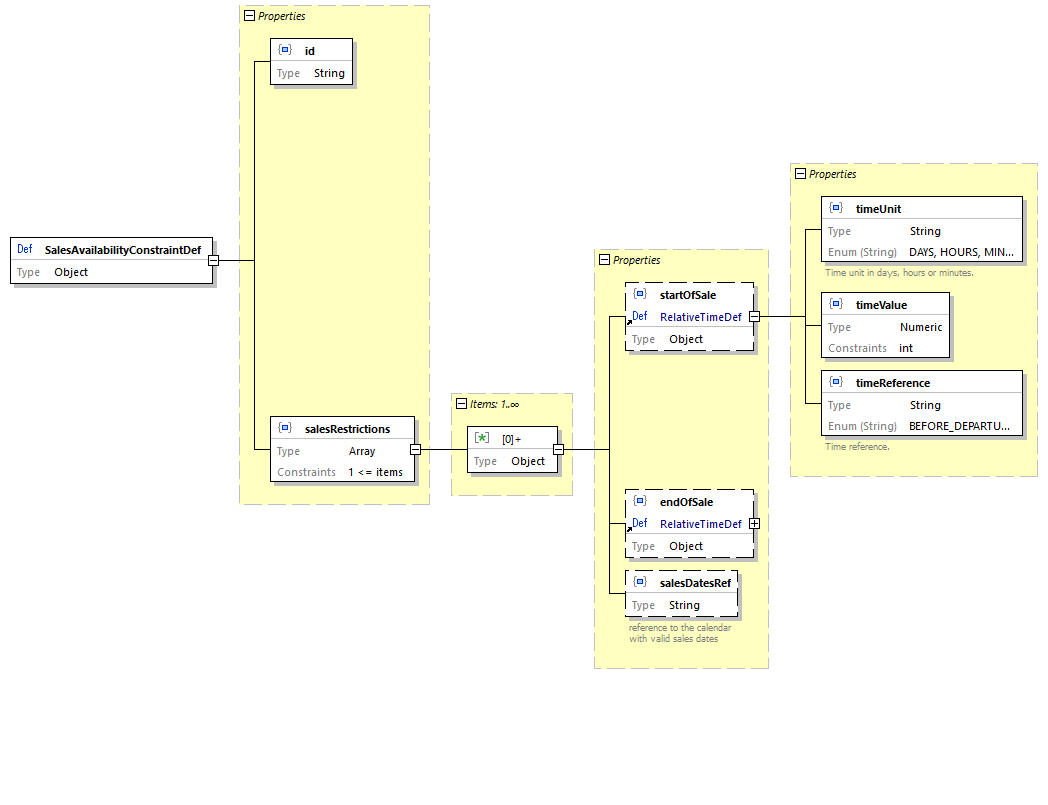 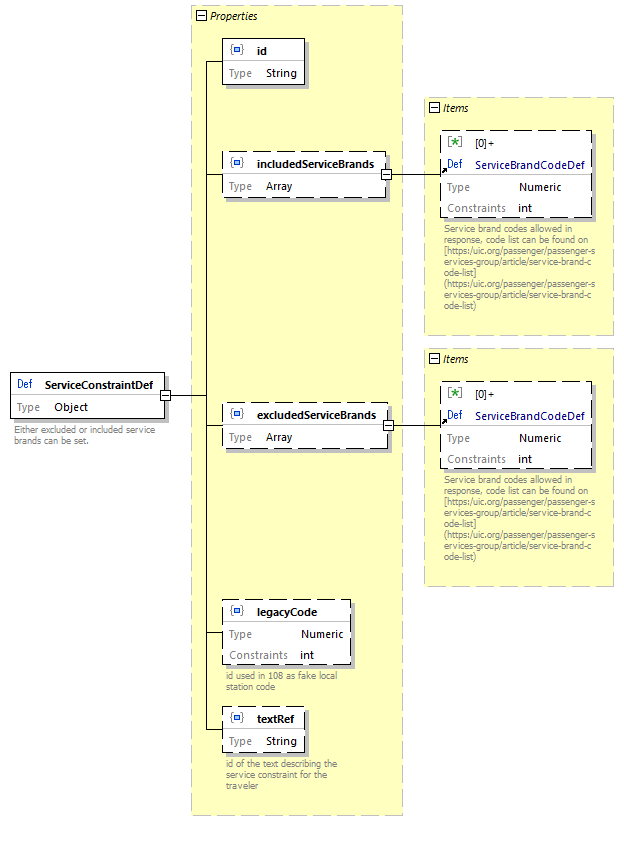 The travel validity defines the duration the passenger has to make his travel. Optional time slots (e.g. peak hours) can be excluded. 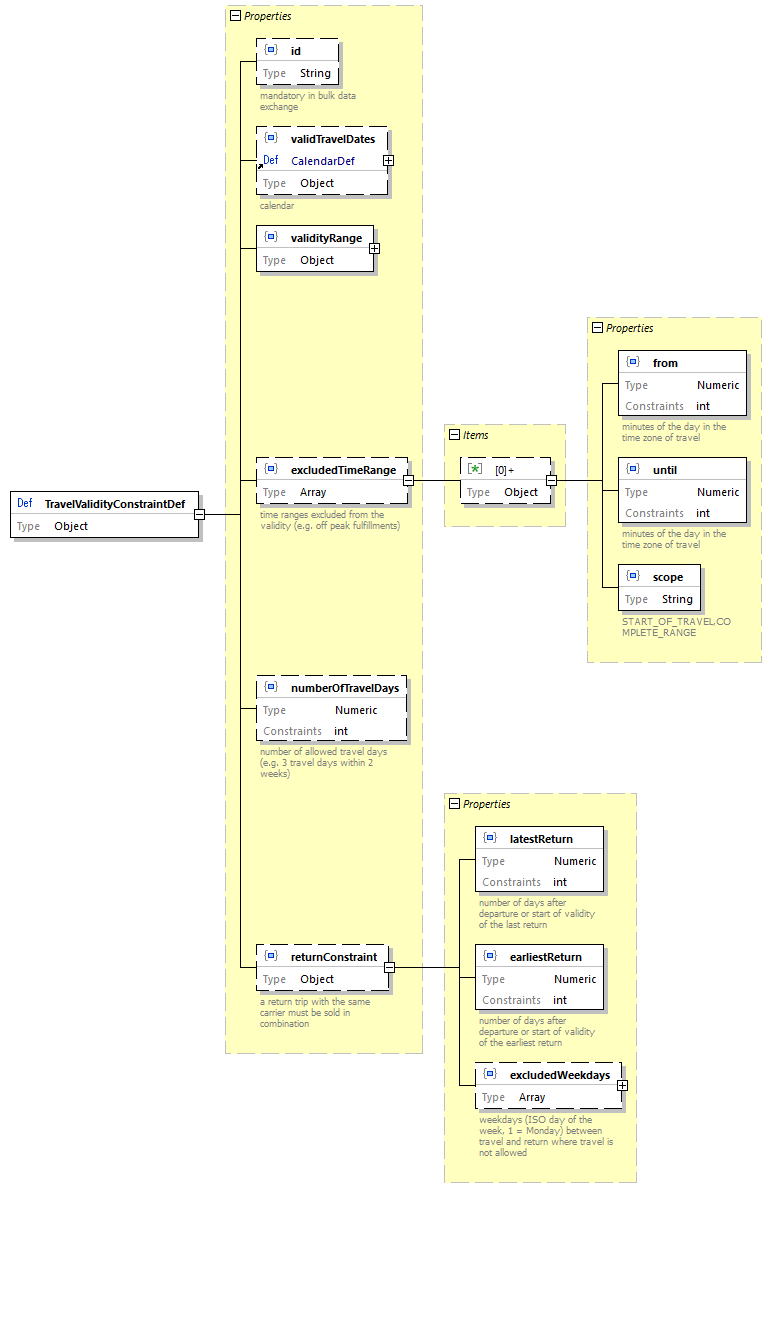 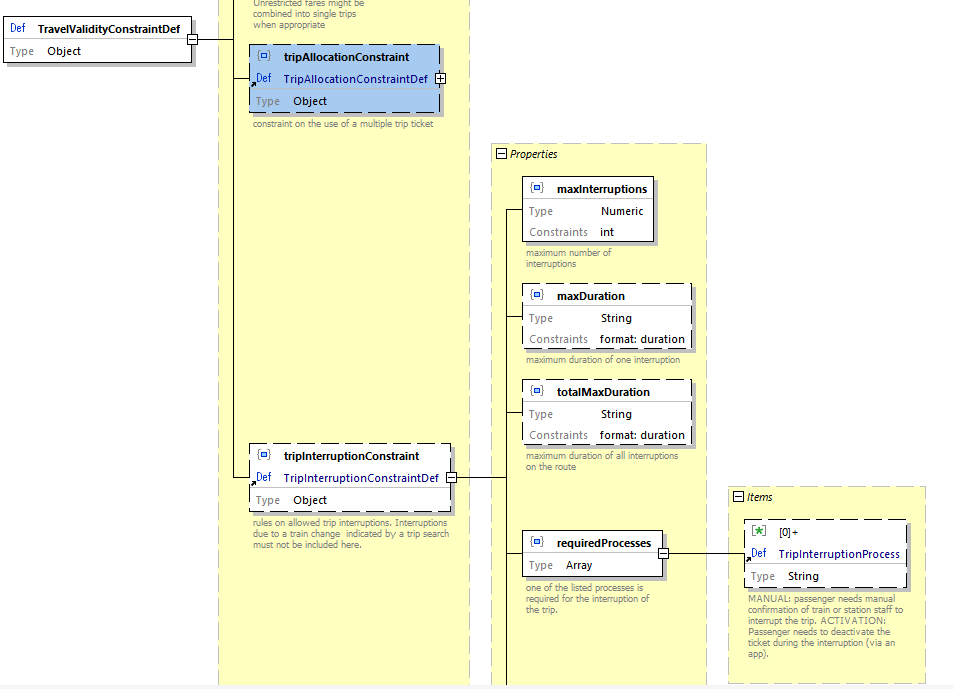 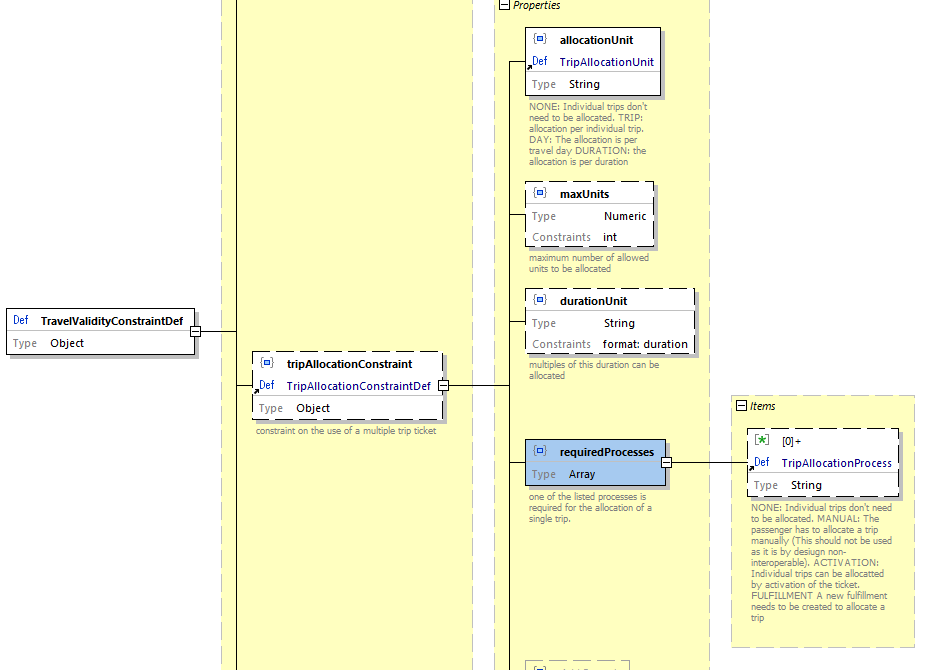 Additional data to support the online sales services can be exchanged. 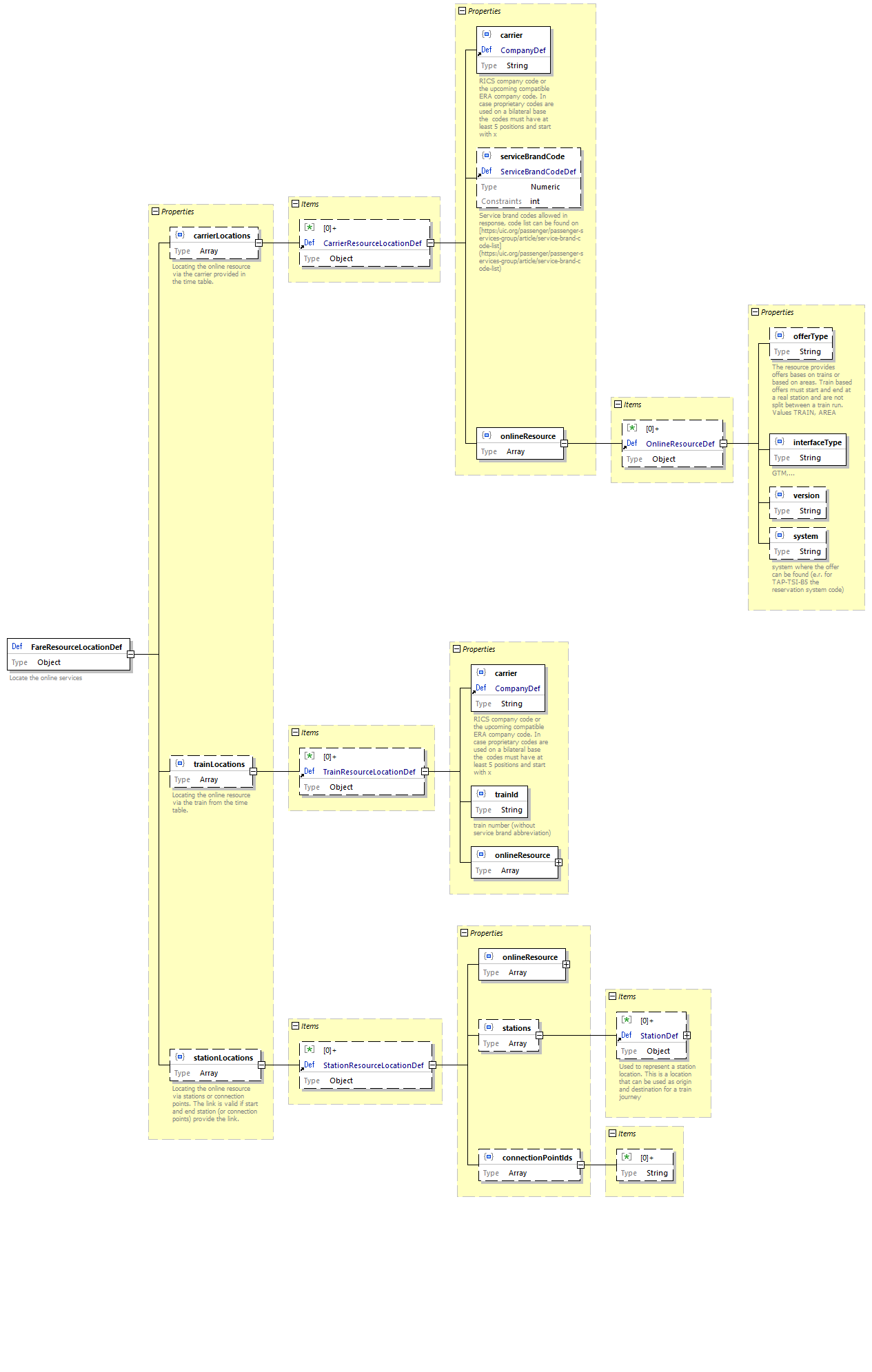 Data to define reservation requirements related to a fare. 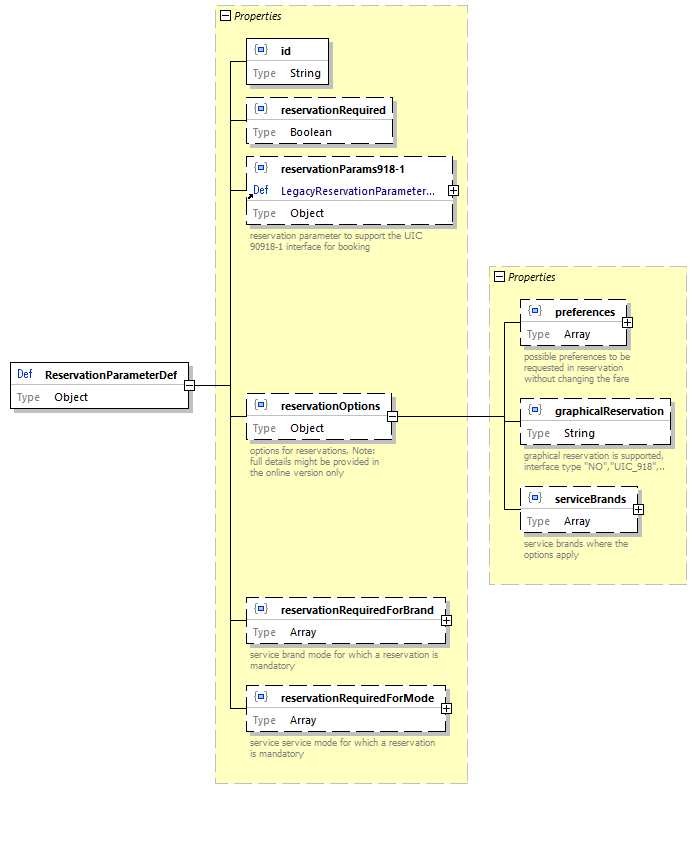